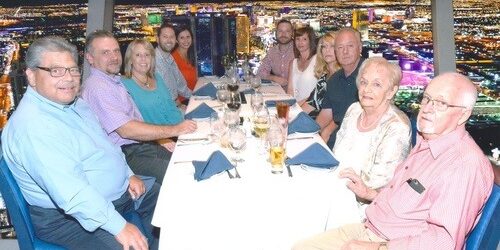 “It was the 20th Anniversary of Uniparts. We celebrated by having our national sales meeting in Vegas. We invited everyone to come down. To make it a little more special, we told everyone to bring their spouses,” says Mike Kaplaniak, a vice president at the company. “Everyone had a great time. How can you not in Vegas? For many it was the first time in Vegas, so it was a really fun”

Everyone from President Claude Zalac to the company’s office manager Christine Reed went along. In total 24 people made the trip, including Ontario and Quebec sales reps.

The group arrived on Tuesday, in time for the Canada night event attached to SEMA. “It was good to see the customers,” says Kaplaniak. Wednesday was a free day to take in the exotic sights and sounds of Vegas. “A lot of the group were first timers to Vegas so we thought we’d let them figure it out. We checked out different shows. Celine Dione was amazing. She puts on a hell of a performance,” says Kaplaniak.

Thursday was the all-day national sales meeting at the Mirage Hotel. After that, it was time to take in the 2016 SEMA show, which they did as a group. “Everyone had time to walk the SEMA floor, most for the first time,” says Kaplaniak.

The anniversary was celebrated in style with a big dinner at the elevated, revolving restaurant called Top of the World located at the Stratosphere Hotel. “We got to see Vegas from above. We went around in the restaurant at least twice during dinner. On top of the Stratosphere were a few carnival rides, some dared to try one of them called the X-Scream. I didn’t try the ride though,” says Kaplaniak.

The celebration was a fitting tribute to the hardwork and dedication that has gone into growing the company to its current size.
Zalac founded Uniparts in 1997. The company facilitates accessibility and management of genuine OEM parts between collision repair centres, dealership networks, banners and insurance companies.

The company started out in a network of fifteen dealerships in the Laval region of Quebec. A year later the company expanded to Montreal. An advance to the South Shore of Montreal followed, and then a foray into Eastern Ontario began in 2005.

Kaplaniak came into the organization four years ago and helped to expand the company across the rest of Ontario.

“Since we started in Ontario, We’ve doubled the sales of the prior year each year. It’s going to be hard to keep that up”,

says Kaplaniak. Not that they won’t try.

“Our goal is to continue expanding. I don’t want to say where specifically,” according to Kaplaniak. “But I guess I can say that we want to expand anywhere in Canada where our model works.”

“We’re selling dealers a service. We offer them sales and marketing support,

“Any market that has multiple dealers and brands is one we would consider.”

As for the SEMA Show, Kaplaniak was impressed as usual. “The show was good. I’ve been every year last three or four years. There were quite a few new things this year, with all the demands and new requirements for OEM certifications,” he says. The show was also strategic for the company.

“One of the things we try to do is instill into our guys that they need to get there so they know about anything and everything in the industry. We tell our guys, ‘Don’t just push parts. Be a resource’,

Every time we meet a client we discuss something that is going to be an added value. We wanted to make sure the guys had some time to visit some vendors and learn everything about the industry as they can.”